Ballet Terminology is like another language in the dance world. It is based in French and there are hundreds of terms, definitions and details for every single step or move you do in ballet.

To start with, it can be tricky to remember for any dancer, but soon it will become a natural part to your dancing. Your knowledge for ballet terminology will improve just like your dancing. 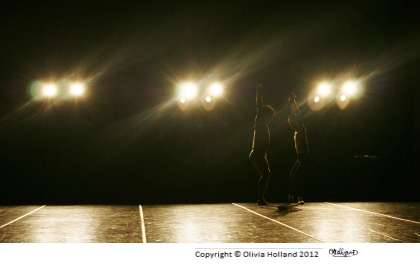 Patience is key if you want to be dazzling in the spotlight.

Lets get started with my simple ballet dictionary and you can understand all the terms.

It continues alphabetically on each page so that you can become more familiar with the brilliant ballet terminology!

Here you will find the section D to L of my ballet glossary:

En Dedans (ahn duh-DAHN) Inwards This term is commonly used in exercises like pirouettes or rond de jambe. In a pirouette en dedan the turn is made inwards to the supporting leg.

En Dehors (ahn duh-AWR)Outwards This term is used in opposition to 'en dedan'. So, for example, a pirouette is performed outwards towards the working leg.

Demi-plié Half-bend of the knees.

Sur les Demi-pointes
(sewr lay duh-mee-PWENT)
On the half-points. This term is used for when the dancer, male or female, stands high on the balls of their feet.

Derrière (deh-RYEHR) Behind, back In ballet terminology this is when a movement or step is placed behind the body.

Dessous (duh-SOO) Under The working foot passes behind the supporting foot, such as 'pas de bourrée dessous'.

Dessus (duh-SEW) Over The working foot passes in front of the supporting foot, like 'pas de bourrée dessus'.

Devant (duh-VAHN) In front This is used in ballet terminology when any move or step in ballet is performed infront of your body.

Écarté (ay-har-TAY) Separated, thrown wide apart The leg is placed a la second en l'air with the direction of the body facing on an angle, usually to the front two corners of the room. 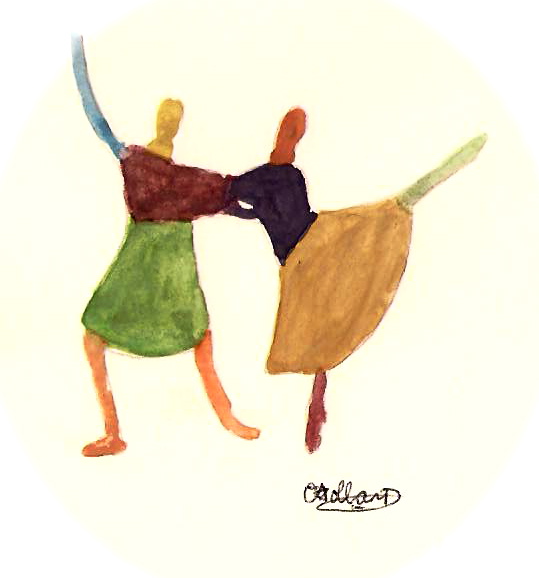 In ballet terminology, an échappé is an opening of both feet from a closed position. It can either be a jump from fifth position to second posiiton. Or a relevé with straight knees on demi-pointes, or pointe for the ladies.

Effacé, effacée (eh-fa-SAY) Shaded In the French method the term for this is "ouvert". It is one of the directions of épaulement and also used to qualify a pose in which the legs are open (not crossed).

Élévation (ay-lay-va-SYAWN) This term would apply to all jumps, as ballet dancers aim to have a great sense of height in allegro.

Entrechat (ahn-truh-SHAH) Interweaving or braiding A quick beating step where the dancer jumps and crosses their legs into the air then lands back down in a fifth position.

Épaulement (ay-pohl-MAHN)Shouldering This movement happens in the shoulders and should show a slight twist of alignment, just so that the one shoulder is brought slightly in front of the other. It gives a finishing artistic touch to a movement and used to give more style to a position.

Extension (eks-tahn-SYAWN) In ballet terminology this is means when a dancer lifts and holds their leg in the air. If a dancer is said to have 'nice extensions' then it refers the clarity, height and strength of their legs when lifted.

Fish dive This ballet terminology is used in pas de deux, it is an advanced and impressive move.

Most commonly, the female is supported by the male and she is off the floor in a horizontal position. The male often takes away both hands so it looks even more spectacular.

Fondu, fondue (fawn-DEW) Sinking down. This is when the supporting knee bends and so the body is slightly lowered in the movement.

Grand Fouetté en tournant (grahn fweh-TAY ahn toor-NAHN)
Large fouetté, turning. This move is usually done en dedans and the movement finishes in attitude croisée, attitude effacée or any of the arabesques. It can be done on demi-pointe or on point for the females and also with a jump.

Fouetté rond de jambe en tournant
(fweh-TAY rawn duh zhahnb ahn toor-NAHN) Whipped circle of the leg turning. This is a challenging move specifically for the female dancers. It is more advanced and quite spectacular once grasped the technique.

Fouetté show the dancer turning in a series with the supporting leg turning and the working leg in a whipping movement. The working leg comes into retire during the turn and extends quickly out through the a la second position in between the turns.

Battement frappé To strike. This is a fast and energetic movement, whilst also preparing a dancer for the jumps later to come.

Glissade (glee-SAD) Glide.
This a linking step for jumps which starts from a plie in fifth position, then the leg glides along the floor before showing a light jump in the air, then landing back in fifth position.

It can be performed to the front, side or back but most commonly used to the side in ballet for a preparation into another jump.

Grand, grande (grahnd) Big, large. For example, grand battement which is a big movement showing the legs thrown into the air.

Grand Battement Large beating. An exercise where the working leg is lifted into the air in a fast and quick motion, then brought back down again.

Grand Jeté en avant Large jeté forward. The dancer throws the foot forward, like a grand battement, at 90 degrees and jumps into a spilt position in the air. The height of the jump depends on the power of the legs and momentum in the dancer's body to get high off the floor.

Pas Jeté (pah zhuh-TAY) Throwing step. A jump from one foot to the other where the working leg is brushed into the air and looks as if it has been thrown.

Jeté entrelacé (zhuh-TAY ahn-truh-la-SAY) Jeté interlaced.
This jeté is performed in all directions and in a circle.

Ligne Line. Through the movements and positions, the dancer can create nice lines. It is the effort of the arms, legs, head and also the sync coordination of the whole body which creates a good line.